Some Abreactions and Observations with The Staircase Deepener 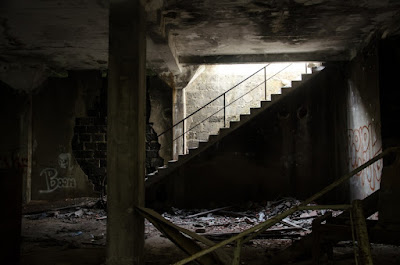 The Staircase Deepener. It's such a common part of hypnotic inductions that it's almost a cliche:
"You are going deeeper and deeeperrr... like a long staircase, down.... down... doooowwwwnnnnn..."

The Staircase Deepener is an odd one. In my experience, it’s extremely reliable and something that most clients can comfortably embrace, but it’s also something that can occasionally trigger unexpected reactions in a way that few other deepeners do.

As a deepener, it’s easy to take for granted. It usually works well whether you're an doing Ericksonian or Elman approach, or something else, and doesn't require much from the subject in terms of holding onto a visualization, like, say, Disappearing Numbers.

The various parts of an hypnosis session all function together like the parts of an engine, and when any part fails to work, it has specific reasons for breaking down, and specific solutions. I've been lucky enough to work with a variety of different subjects and had some interesting unexpected reactions to the seemingly innocuous Staircase Deepener, which I'll share with you followed by my assumptions about why, as well as some simple solutions.

First, let's be sure we're all on the same page.
The Staircase Deepener asks the client to imagine standing at the head of a long staircase going down. With suitable tonality and ancillary imagery, the hypnotist suggests that with every step down, the client is becoming more relaxed, stepping down into warm, comfortable relaxation, maybe stepping down into a place within themselves that is safe and secure. The hypnotist will usually suggest a number of steps (generally around 10-12), with the final step being the step off into total relaxation. Numbering the steps is very useful in reducing client uncertainty, and at the end of the session, the hypnotists can walk them right back up the stairs by reversing the count. As a "deepener" it's something that we introduce when the client is already in the process of being hypnotized, usually already relaxed and with closed eyes.

The strengths of this technique are that it combines a little visual imagination with some tactile imagination, and it has a distinctly limited length according to the number of steps. And because people commonly describe relaxation as the sensation as "sinking" or "going down” and "waking up" is synonymous with "getting up," it ties comfortably into ordinary everyday experiences of waking and sleeping.

So what can go wrong? An abreaction can occur when the hypnotist touch on something within the client that is emotionally difficult and powerful and it may or may not be related to the issue that the client has come to see you about.
The people I've experienced who have abreacted to the staircase deepener tend to be people with unresolved abuse experiences and, interestingly enough, police detectives, though I'm sure there are others you may come across.
It's odd that something so seemingly innocuous can bring out such strong reactions, and it can catch a novice hypnotist off guard, particularly if the abreaction occurs during something like a light-hearted hypnosis demonstration, or in a private session with a client where no strong personal feelings are expected to come up. Murphy's Law being what it is, those are probably the first time you'll experience it.

The signs that the Staircase Deepener is taking a wrong turn may be subtle or they may be obvious. As the experience becomes less fun for the subject, you may see physical stiffening or tightness in the neck and shoulders, tightness in the face and around the mouth and eyes, change in breathing, or perhaps other signs of resistance. Their eyes may tear up, and they may even come out of trance completely. You must be sensitive to the client's subtle expressions and don't try to force the deepener. Instead of going down, go up. Reverse the count and have them climb upwards into someplace bright and friendly. Maybe even turn them into a bird and fly into the clouds. Sometimes, once the negativity starts to manifest, they'll get stuck on one of the negative feelings, in which case suggesting something like "you can come back to these feelings some other time, anytime you feel safe and comfortable and in control doing so, but right now let’s go in a different direction."

If the feelings around the abreaction do not seem to be involved in the issue for which you've hypnotized them, respect their privacy and lead the trance back on its correct path. Even if the client specifically and explicitly asks to explore these difficult feelings, it's usually best to explore with another approach that allowed the client to access those inner feelings in a way that gives them more of a feeling of control. Since part of the abreaction for the client is feeling helpless or even a feeling of being controlled by these emotions, I'd generally take an approach other than walking down into a dark cellar, horror-movie style.

I suppose that unresolved, strongly emotional issues, such as abuse, get stored away deep within a person, and as they imagine going down within themselves, it may lead  to that place within themselves where these things are stored, even if that is no one’s conscious intention.

But why might a police detective, in particular, have a bad reaction to the imagery of a staircase? Rather than psychological, it's a purely experiential one -- when a detective has to go down a staircase into the unknown in real life, it's never a good thing. What's waiting for him at the bottom may either be an armed suspect, or a decomposing body! In this case the deepener is revivifying a prior experience of dread. Sometimes the unintentional trigger is one that touches directly on memories, rather than something more psychological or metaphorical.

It's important for both hypnotists and subjects to know that while the Staircase Deepener might accidentally access hidden emotions and experiences, as in the rare cases mentioned above, it won't compel the client express those feelings or memories out loud if they don't want to. It's not a truth serum. Trying to use it as such may only compromise the client’s trust.