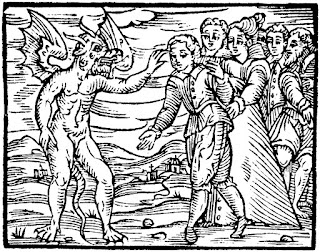 Or maybe witchcraft is just hypnosis? If you think we have a unique, modern understanding of the mind-body connection, consider this quote which is the opening of Compendium Maleficarum, a 17th century manual for witch hunters and exorcists:

"MANY authors have written at length concerning the force of imagination.... All are agreed that the imagination is a most potent force; and both by argument and by experience they prove that a man's own body may be most extensively affected by his imagination. For they argue that as the imagination examines the images of objects perceived by the senses, it excites in the appetitive faculty either fear or shame or anger or sorrow; and these emotions so affect a man with heat or cold that his body either grows pale or reddens, and he consequently becomes joyful and exultant, or torpid and dejected. Therefore S. Thomas.has well said that a man's body can be affected by his imagination in every way which is naturally correspondent with the imaginative faculty..."

Of course, being  a witch hunter,  the rest of Guazzo's book goes on to discuss how, while witchcraft is all of the imagination, the power behind it comes from the devil, and is evil by nature.

The book itself is quite an interesting read, and a real insight into the state of science and psychology of it's time. You can read stories of possessions and enchantments and consider how today we might understand those things to have psychological causes rather than Satanic ones.