I wrote this to someone in response to a great little article in Forbes recently. The author discussed his experience with utilizing intuition in a field he's an expert in. What I liked so much about the article is that he describes his experience first hand. The article is called "Intuition is the Highest Form of Intelligence", by Bruce Kasanoff. You should definitely give it a read, and you can find it here:
https://www.forbes.com/sites/brucekasanoff/2017/02/21/intuition-is-the-highest-form-of-intelligence/#405ad7ff3860

I don't think he's saying intuitive people have more intelligence, but rather, when you're very well versed in your area, you will also develop an intuitive ability that can be relied upon, and that is certainly verifiable in a number of areas.

Lets talk about sports, say basketball, though any sport will do. A novice or occasional player will either have to go out and guess what to do without any understanding, or, if he knows a little more, but not much more, he'll have to play "by the numbers" following well established formulae that are taught to all players about what shots to take in which places on the court, what you're "supposed to do" when playing offense of defense, etc. And the guy following those rules will play better than the guy who's just out there flailing around.
BUT, a professional player, one with thousands of hours on the court will have internalized all those "standard formula" but he'll also have an additional understanding based on his own experience. Those "rules" will have become internalized to the point they become INTUITIVE, and they will free up his conscious understanding to perceive possibilities and options that he can take advantage of that the "play by the numbers" players cannot. 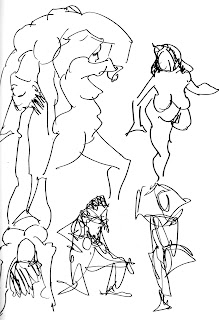 I occasionally teach drawing, and this is something I actually talk about a lot in my art classes. When an artist is trying to learn to draw a human figure in proportion and get the arms and the legs all the right size, it takes a certain amount of deliberate study, since there are all kinds of things working against him (for example, psychologically, we give more importance to heads and hands, so we tend to make them bigger; foreshortening in a lot of poses gives artists false cues about how limbs relate to each other). So there's a phases where a developing artist might spend a lot of time deliberately measuring out everything in the drawing to get it just right.

But all of that academic study may still not give the artist sufficient grasp of proportions so that they won't still be a stumbling block.

So I encourage artists to work a lot from FAST poses, usually 30 second poses, and to do a lot of them. Why? Because in 30 seconds, there's simply NO TIME to think about what you see and transfer that into something you're drawing on the page. Drawing fast COMPELS you to develop an intuitive understanding of the figure and it's parts as a single whole thing. With practice, it compacts that "conscious competence" into the subconscious part of the brain where it becomes a reliable, intuitive function. Not guessing.