Recently a discussion with some friends still in the business inspired me to write a little bit about what I've learned about how, and how not to, manage people, based on what I've experienced, including my own mistakes and successes.

"If you had to give someone a lot of advice in a short amount of time, what would you tell them?" In response to the question, my mind ran through books and videos I'd studied, and then it hit me. There's a great resource for getting a basic understanding of right and wrong ways to run groups of people, and that's on TV! Perhaps you've seen some shows where an expert is called into a failing business in order to pull them back from the brink of failure. The genre started out with Ramsey's Kitchen Nightmares in 2004 (which rescued restaurants), and has expanded to all kinds of businesses (though mostly in the hospitality industry), including Hotel Impossible, Barmageddon and Bar Rescue.

Now before you get too worked up that we're talking about reality television, and it's highly possible that some of the action may be contrived or scripted, I won't disagree. I have no idea, and some of the action is clearly formulaic, for example, the way the rescuer always has a blowout before the rescue. But that in no way negates the value of what these shows can offer you.
I'll also add that some of the action and advice on the show may only be pertinent to a highly specific kind of businesses, and sometimes, the problems the business is facing is clearly out of the hands of the owner.

Nevertheless, in many of these shows that depict failing businesses, you can clearly see how mistakes in a management have had their effect of the failure.

What can we learn from these shows?
Most often we see managers/owners who are either too rigid and inflexible, or too easily influenced or not assertive enough, in other words, too strong or too weak. It's important to remember that while some of these people may have been the way they are from the start, a bad business can bring out the worst in people, and fear of failure often blinds people to what is obvious to other people around them.

The ones who are too strong may be operating out of arrogance or narcissism, they might also be working from a very narrow and rigid creative vision. It might even go back  to their own upbringing, and they may not know any better. But the result of being too strong is that it makes them blind to the circumstances that are hurting their businesses, or they may feel that the solution lies in more force. The effect they have on their staff is to stifle creativity and motivation, and they may be blind to valuable skills that their individual staff members bring. In worst-case scenarios, they can even inspire staff apathy and even sabotage.

Those managers/owners who fall into the too-weak category may be expressing a feeling of being unqualified, they may be focusing too much of their energy on other areas of their lives and neglecting the business, they may be inexperienced in asserting themselves, they may have given up once the business has started to fail. Some may be too open to outside influences and unable to make up their own minds. Their employees may be frustrated at the lack of direction, which can lead to worker apathy, taking advantage of their work conditions thorough poor performance and pilfering, and infighting, perhaps from the lack of structure and clear management.

One show that is particularly interesting for students of management is Barmageddon. Instead of trying to fix a failing business, they take the managers from two very different kinds of bars, and have them manage each other's bars for a week. For example, in one episode, the manager of a very formal, boutique cocktail bar and the manager of a wild sports bar change places for a week. It's extremely interesting to see how the staff reacts as the managers change the established patterns and customs of the work environment, and even their relationship to the customer base.

There's a fair amount of food for thought there already: management that is too strong or weak, it's influence on the staff and the business, and also the effect on the personnel when management changes.

I'm looking forward to writing more about management in future posts, but I'll leave it here for now. Check out some of these shows and tell me which your favorite is. 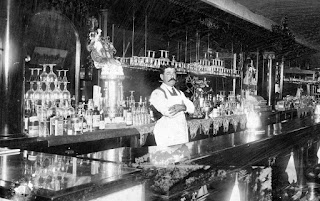