Politics, Sure, but What the Heck are They Talking About?

I once had a dream that I went with a friend to the Gates of Hell. It was a huge crater in the Earth covered in sick green shrubs and centuries of wrecked and ruined structures all down the slopes leading into the darkness. It was unnaturally cold and quiet, and the misty air was filled with sadness.

As we stared into the depths, we became aware of strange, wispy, ghostly forms, flying around and around in the depths. My friend asked me what they were, and I, apparently heir to occult knowledge, told him they were the hopes and dreams, loves and hates of people who had died before they ever had a chance to resolve them. They fly around and around like lost dogs looking for home. Over thousands and thousands of years, some take on enough power and intelligence to achieve lives of their own, and they escape from the pit as demons, often very, very different from the innocent feelings they started out as, and they go forth into the world to influence people and events in ways that no one can imagine.

Here in the USA, we've got a presidential election coming up, and the internet is abuzz with all kinds of discussions. People with more common sense probably avoid political discussion like the plague, but I'm fascinated being able to learn the thinking of people with views very different from my own, and for me, the internet is an ideal place to learn. There's a lot of juvenile noise out there, but there are people representing all different kinds of politics who can have an intelligent, if heated, discussion, and that's where you'll find me.

However, there are these things I come across in discussion that confound and frustrate me, and, like the demons in my dream, seem to have a life and intelligence of their own, yet impose a powerful influence on people's thinking. And like those wispy spirits, they seem to have metamorphosed into something very different than their original incarnation. Stranger still, people possessed by these sprites assume that everyone else knows and understands them in the same way that they do. I guess you could call them memes, mind viruses, or even brain worms. NLP might refer to them as metaphors or nominalizations.

What I'm talking about are these catchphrases that people of a like mind all agree upon so insistently that they can no longer be broken down into their the component facts that once spawned them, and they have become an emotional hot-button, rather than information. In nearly all cases, these demons have wrapped deliberate disinformation around a core of fact.

Now, when I talk politics on line, I usually find myself in disagreements with people both on the left and on the right. What I see when these demons are at work is a normally thoughtful, rational individual will become emotionally charged and completely intractable when these demons are invoked. I always try to ask "what do you really mean?" or "can you define it better" or just, "I don't get it, explain it." But they never do.

Do you know what I'm talking about? Things like:
All the candidates are the same!
All Christians are hypocrites!
You don't want government involved!
All Southerners are racists!
All Muslims are a threat!
Benghazi!
Socialism!
Free stuff!

They're generalizations. They're false, but some evidence could be found to show they're occasionally or conditionally true. The people will fight before they stop to really examine them. My experience is that these demons are pretty intractable. When they come up in conversation they're usually embedded deeply into a person's belief structure --their map of the world-- and so, are very hard to approach objectively.

But like something from an old Vincent Price movie, these evil influences spread through entire groups of people who embrace them willingly, an the demons bend and twist otherwise intelligent people to do their bidding. 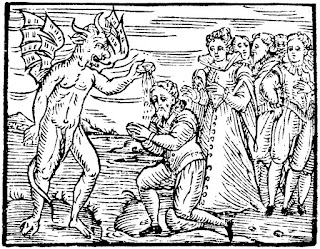 I wish a I knew a way to exorcise these conversational demons, but the people so possessed seem to love them and won't give them up for anything. But at least you can be vigilant against getting possessed! Don't get sucked into the emotion of it. Don't accept the generalizations, don't be afraid to examine your own beliefs and always be willing to change and correct yourself if you're wrong, even if you've invested a lot of time and feeling.

What do you think?